BookPeople is OPEN to the public in a limited capacity More information here! 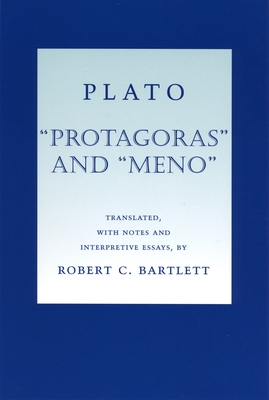 This volume contains new translations of two dialogues of Plato, the Protagoras and the Meno, together with explanatory notes and substantial interpretive essays. Robert C. Bartlett's translations are as literal as is compatible with sound English style and take into account important textual variations. Because the interpretive essays both sketch the general outlines of the dialogues and take up specific theoretical or philosophic difficulties, they will be of interest not only to those reading the dialogues for the first time but also to those already familiar with them.

The Protagoras and the Meno are linked by the attention each pays to the idea of virtue: the latter dialogue focuses on the fundamental Socratic question, What is virtue?; the former on the specific virtue of courage, especially in its relation to wisdom. An appendix contains a short extract from Xenophon's Anabasis of Cyrus that vividly portrays the figure of Meno.

Robert C. Bartlett is the Behrakis Professor of Hellenic Political Studies at Boston College. He is author of The Idea of Enlightenment: A Postmortem Study, editor of Xenophon's The Shorter Socratic Writings (also from Cornell) and of Pierre Bayle's Various Thoughts on the Occasion of a Comet, and coeditor of Action and Contemplation: Studies in the Moral and Political Philosophy of Aristotle